When it comes to travel vaccines, it pays to shop around. 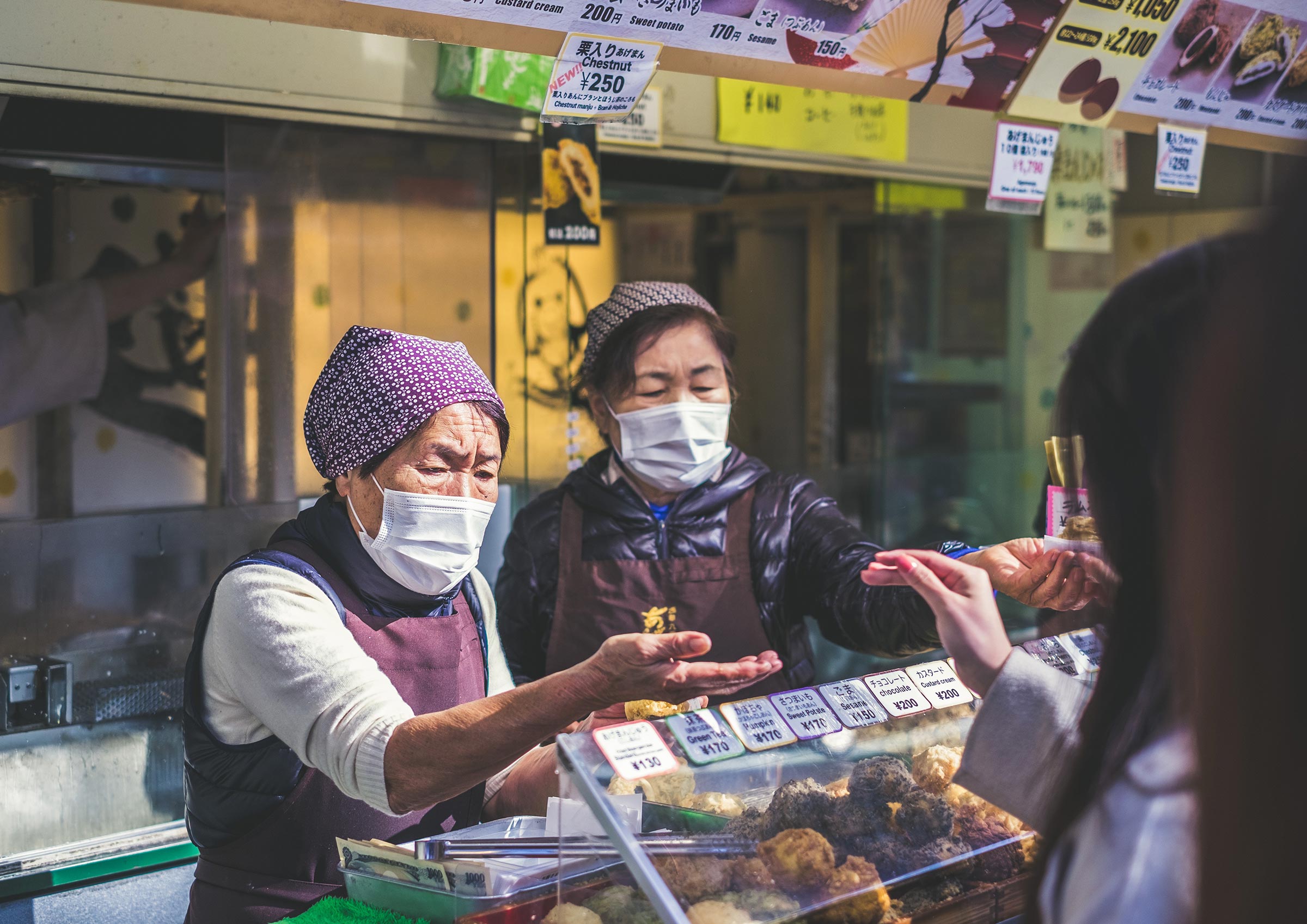 As more and more Canadians flock to exotic destinations this summer, questions and concerns about the need for travel vaccines are on the rise. Going to popular tourist destinations may put travelers at risk for contracting common preventable diseases, such as malaria and yellow fever. The Government of Canada recommends travelers consult with a doctor or travel health clinic at least six weeks prior to leaving the country, as some vaccines may require multiple injections at different times prior to travel.

How much is generally paid for vaccines depends, of course, on where you are traveling and how long you are staying. But could your location within Canada play a role as well?

To find out, we called up travel clinics in the largest cities of each Canadian province and asked for price quotes. Our assumptions were for a single adult, traveling alone for 30 days, who has never had a travel consultation, traveling to three popular foreign destinations:

In all, the list of vaccines and prescriptions analyzed were for:

At least five quotes were collected from each of the five cities for the vaccines in question, which were then averaged to assign a single price to every vaccine. Our findings revealed that although average prices certainly vary from province to province, prices for vaccines within a single city fluctuate wildly as well.

Out of all the products, only the prices for Ciprofloxacin and Mefloquine stayed constant across all sites, with most prices falling between $18–$20 for 10 doses of Cipro 500 mg, and $40–$45 for 8 doses of Mefloquine 250 mg. When it comes to these two medications, the numbers indicate little need to shop around for the best deal, but all other vaccines on our list indicate a different story. 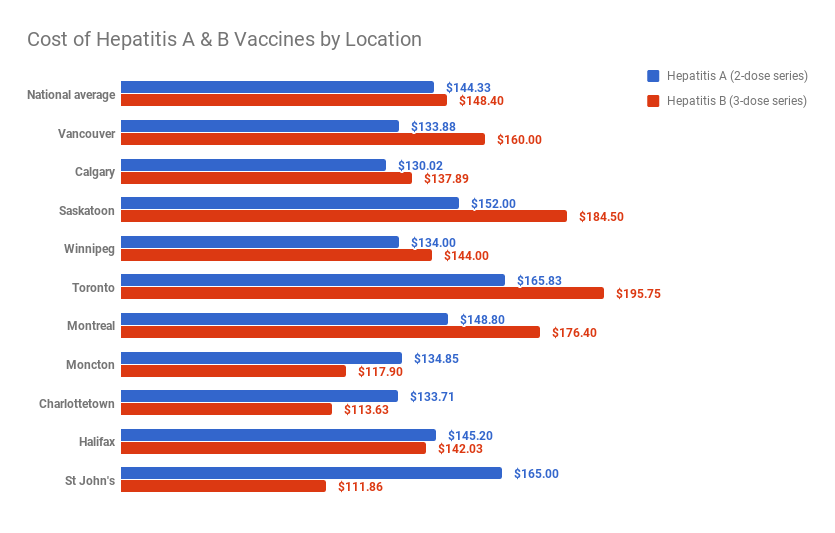 Looking at the averages, the prices seem fairly consistent for Hepatitis A, with most clinics quoting between $130–$150 for two shots. But on an individual basis, the numbers tell a different story. Prices in Halifax, for instance, range from $128–$200. Quotes for Hepatitis B vaccines were just as variable. In this case, the specific clinic you visit may have just as large an impact on what you pay as the province you live in. 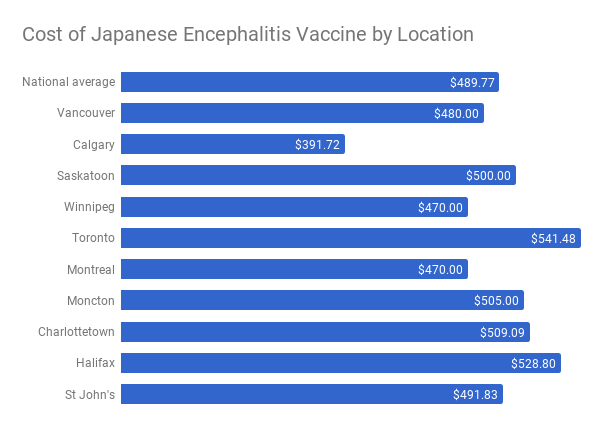 Perhaps the most striking differences are found with the cost of the Japanese Encephalitis vaccine. Everywhere in Canada, this is the most expensive vaccine out of the ones analyzed by far, but in addition to vast disparities within cities (in Calgary, two shots can cost you anywhere from $220 to $592), prices between provinces were also poles apart. Getting vaccinated for this disease in Toronto would set you back, on average, $150 more than if you were to receive it in Calgary. 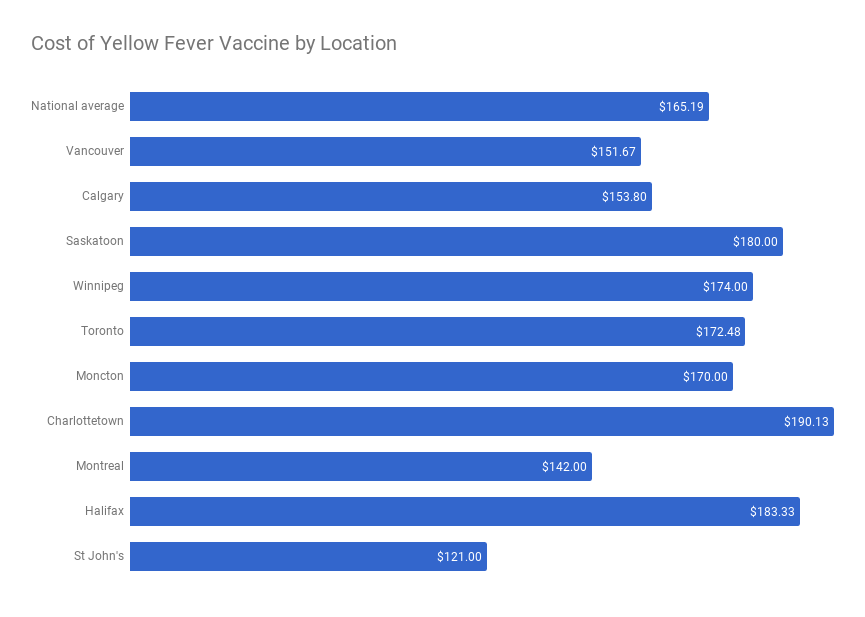 For vaccines currently seeing a shortage, such as Yellow Fever, things can be even more unpredictable: one representative from a Halifax clinic told us that the price of the vaccine (which is currently being given only in fractional doses) depends on “how many people need it that day.” In addition, only select clinics in each province are licensed to dispense this vaccine, leaving consumers with limited options. 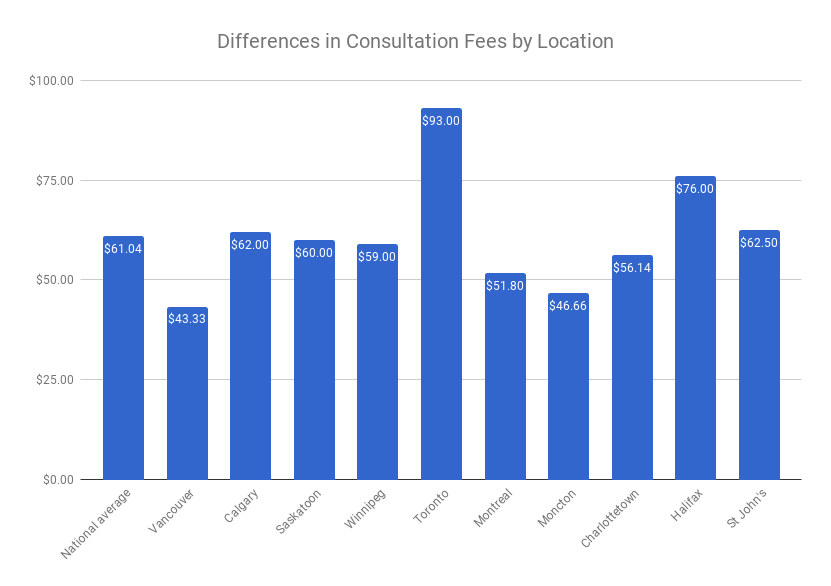 Furthermore, as seen above, the price of the consultation fee itself appears to be highly variable. Some locations charge different prices depending on where you are traveling, with resort destinations in Mexico, or the Caribbean often costing less than trips to Asia or Africa, which may require more complex vaccine plans. Still others offer lower rates for returning customers or family deals, although the numbers we gathered for our statistics were, again, for a single adult with no previous travel vaccination history.

The most affordable consultation fees can be found at Clinique du Voyageur (Montreal) and MDKonsult (nationwide), offering $35 and $39 respectively for a comprehensive consultation. The Vancouver locations for London Drugs and Passport Health aren’t far behind, charging a moderate $40 for their time, although it is interesting to note that these prices are for Vancouver only—both chains quoted higher prices at their locations in all other cities we inquired about. When asked, representatives were unclear as to why only Vancouver received the special discount.

Another notable cost is the injection charge, an additional fee for administering the vaccine on-site. Mark Wise, a Toronto family physician speaking to the Globe and Mail, stated that implementation of the fee is completely at the clinics’ discretion: “We are within our legal rights to charge what is not covered [by the provincial health plan].” Clinics in Calgary are especially inclined to add the extra charge, with half of the locations we spoke to mentioning a $20 price tag for the service. Interestingly, none of the offices in Montreal and Toronto require a similar payment. (For simplicity’s sake, the consultation fees used in these graphs include any possible injection charges in order to produce a single figure.)

It is possible the clinics that do not charge injection separately are simply bundling it within their consultation fee. Given that one office in Toronto we spoke to quoted a sky-high $225 as its initial consultation fee—whereas the majority of locations across the board modestly charged between $40–$75—the practice of “bundling costs” is entirely likely. To further complicate things, other clinics include the injection service fees within the prices of the vaccines themselves, which may inflate the price of the vaccines for those locations. 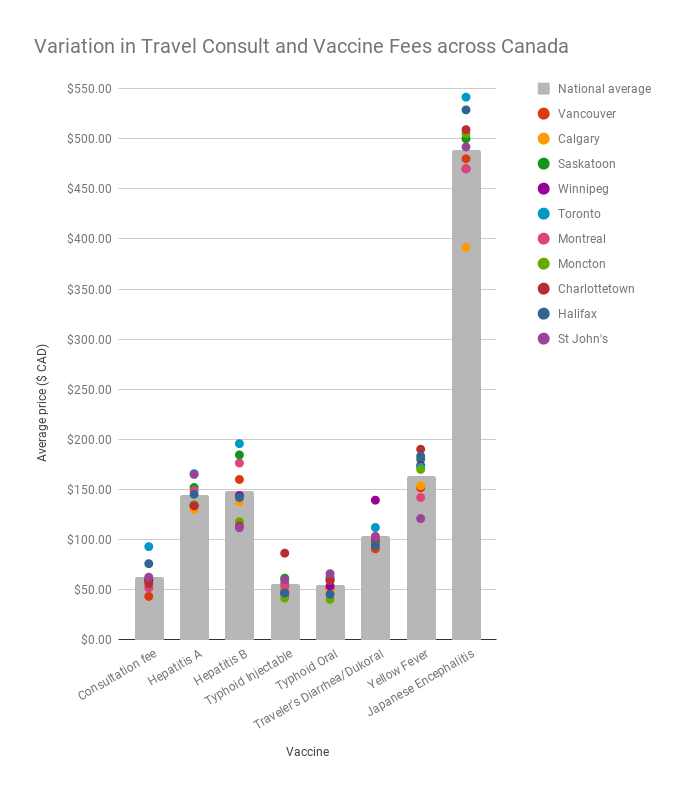 When it comes to overall trends, residents of Toronto get the short end of the stick. Canada’s largest city leads the way in terms of prices for just about every vaccine. In general, Central Canada appears to charge a bit more than the rest of the country, with Toronto being hit the hardest by high prices, and Halifax and Montreal not far behind. The West is in slightly better shape than the rest of Canada when it comes to vaccine pricing: Calgary enjoys the lowest costs overall, while Vancouver consumers save the most on consultation fees.

When comparing the most and least expensive cities, the difference is significant: the summed average prices for all vaccines and consultation fees is $1396 in Toronto and $1075 in Calgary, a price gap of over $300. Compare this with the national average of $1220, and it’s evident Calgarians enjoy far better prices on travel vaccines than their fellow Canadians.

Even within the same company, there are variances. Several national chains, such as Shopper’s Drug Mart and Medisys, gave different quotes for the same vaccines depending on the province. Why this price discrepancy? It appears to be a simple supply-and-demand problem: Dr Rahul Mehta, a doctor with MDKonsult based in Calgary, stated that the cost of vaccines paid by all pharmacies across Canada is the same, so any differences in price between locations is a result of the pharmacy or clinic’s individual pricing decisions. When asked why vaccines had been priced higher at their Ontario offices than those of other provinces, Medisys was unable to provide a definitive response, vaguely citing differences in vaccine availability and the interference of provincial laws. In spite of the ambiguity, it’s safe to say that the GTA’s large population is a contributing factor in driving up Toronto’s vaccine prices.

While there may be no single obvious answer as to why vaccine prices vary so much in Canada, what’s clear is that no matter which province you’re from, doing some comparison shopping before choosing a clinic is well worth your time, and may save you hundreds of dollars. Some travel clinics offer discounts on consultation fees for groups, or even for visiting on specific days. Even if you are from Ontario or another province that may see slightly higher vaccine prices on average, with a little research, the difference you end up paying may not be so big after all.